Every Summer since 2013 I’ve taken two or three weeks of vacation to travel somewhere. This year is different; the world is a scary place and even if I felt comfortable traveling, there aren’t a lot of places that would feel comfortable having me. This is sad.

I decided I needed a vacation, travel or no. This past week, I took the week off work. Honestly, my only regret is not taking more time. It’s been fantastic.

On Monday, my wife and I went to the beach. This was a calculated risk. On one hand, people are going to the beach in droves and getting each-other sick. But on the other, we thought if we went on a Monday during the day we might avoid crowds and stay fairly safe. We chose a North Carolina beach in an area with a low infection rate and decided to chance it.

It was a pretty good trip! The sun was absolutely brutal but the water was lovely. There were still plenty of people on the beach, but folks were overall pretty good at distancing. There were not a lot of masks in evidence, but it seems like we managed to stay safe. One rarity: between the two of us, we took no pictures of this trip. Partly because we were enjoying the moment together, partly because we both left our phones in the car to avoid beach-related mishaps.

Much of the week I spent working on various projects. Bill Watterson once wrote:

We’re not really taught how to recreate constructively. We need to do more than find diversions; we need to restore and expand ourselves. Our idea of relaxing is all too often to plop down in front of the television set and let its pandering idiocy liquefy our brains. Shutting off the thought process is not rejuvenating; the mind is like a car battery — it recharges by running.

I find that if I spend an entire vacation watching things on TV or YouTube, playing video games, or even reading, at the end of the vacation I don’t feel rejuvenated, I feel lazy. I don’t want to do anything. But if I spend a vacation doing things, I end the vacation more ready to keep doing, with the added benefit of having dealt with a few to-do items that have been hanging over me.

My current project around our house has been tidying and organizing the garage. I’ve been making slow progress on this front, and I continued my slow progress this week. An attempt to build a storage solution for my bicycle turned out to be a failure, but in a reversal of fortune I was able to use the solution to store the hedge trimmer instead. I call it a victory.

I also spent quite a bit of time researching and then writing my blog post on Tolkien’s Rings of Power. I love writing these pieces on the Legendarium; like the good professor himself, often my greatest regret is that at some point I have to stop writing and publish (though while reading through his letters, he did reach a point where he decided he had worked quite enough on The Lord of the Rings, thank you, and if a publisher wanted him to make substantial changes he would rather find another publisher. It seems this was not because he was tired of working, but because he had shifted his focus to The Silmarillion and did not want to emerge from those particular depths at the moment.) I know that none of these posts are perfect, but I take a deep satisfaction when they reach a point that I think they can be called “done.”

I also have another project I’m working on, a programming project, which I made significant progress on. I’m not done with it yet, but I managed to figure out a particularly tricky bit (involving some math, even) which I’d been stuck on for some time. Having this breakthrough really re-energized me and I hope to use this momentum to push this project through to completion before too long!

I haven’t had much opportunity for bird photos lately, but sometimes the bird photos come to me! Sunday afternoon after our virtual church service, we heard the birds in our backyard going absolutely mental over something. Looking out the window, we saw a large barred owl! 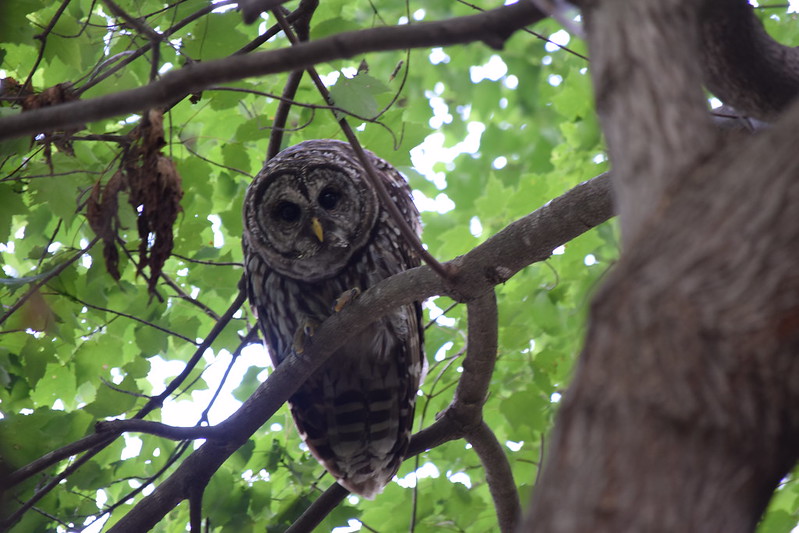 It was nice to practice my photography without having to leave the yard!

There are so many more things I had hoped to accomplish (I always over-estimate what I can get done in a week!) and I certainly wasn’t working hard all the time. But overall I would call it a very enjoyable week of vacation!

One thought on “My 2020 Summer Vacation”