About a year after buying my first house, I found myself in need of a shelf. I could of course have just bought another set of shelves, but I decided that my best course of action would be to construct a shelf on my own.

Being an engineer, I do have a certain practicality about me and a degree of understanding when it comes to how things are constructed. I have the ability to reason about a problem and come up with sensible things to try.

This does not mean in any way that I know how to build a shelf.

I had several strikes against me from the get-go. For one, the only woodworking tools I had were a power drill and a hand saw. For two, I had effectively no experience. And for three, my attitude could best be described as “how hard could it be?”

I went to Lowe’s and bought some plywood and 2x4s. One cool thing about those hardware stores is that they will usually cut the wood you purchase for you, which was key for me because I didn’t really have the ability to cut it myself. I think nominally only the first couple of cuts are free, but most of the employees enjoy using the table saw more than they enjoy the other aspects of their jobs so unless you have a lot of wood or a lot of tricky cuts they’ll probably do it all for you at no charge.

In any case, I had at the very least written down the rough measurements I wanted before I set off, so I was able to have them do my cuts for me with minimal fuss. I also walked into the fasteners aisle and purchased the first thing I saw labeled “wood screws.” I was set. I threw the wood in the back of my Fiesta and drove home.

I had a two-car garage and only one car, so in retrospect it’s a bit confusing to me why I decided to build the shelf in my dining room. I can only assume it’s because that’s where the shelf was eventually going to wind up, so I figured I’d throw it together there to avoid the hassle of transporting it the 20 or so feet from the garage to the dining room. Who knows.

My plan was to hold the plywood horizontal and then screw through the 2x4s into the plywood, securing the plywood to the supports. Anybody the least bit familiar with the art of furniture building will tell you this is not the optimal way to construct a set of shelves even under ideal circumstances.

My circumstances, as it turned out, were less than ideal.

The biggest problem I faced was that the wood screws I bought were not long enough to go all the way through the 2x4s and into the plywood. The fact that it never occurred to me to check just shows the level of callow ignorance I was working with at the time.

A reasonable person might venture out to buy a set of longer wood screws. Or perhaps might stumble upon the solution of cutting small strips of wood, screwing those strips into the supports, and setting the shelves on those strips (which, as it turns out, would have been a somewhat less-awful way of building shelves anyway). Being an entirely unreasonable person, I decided the best approach would be to use my drill to countersink the screws, allowing them to reach through into the plywood.

Of course, I didn’t have a countersink bit for my drill. So I just used the biggest bit I had and waggled it around in the hole to create a bigger hole. As one does. 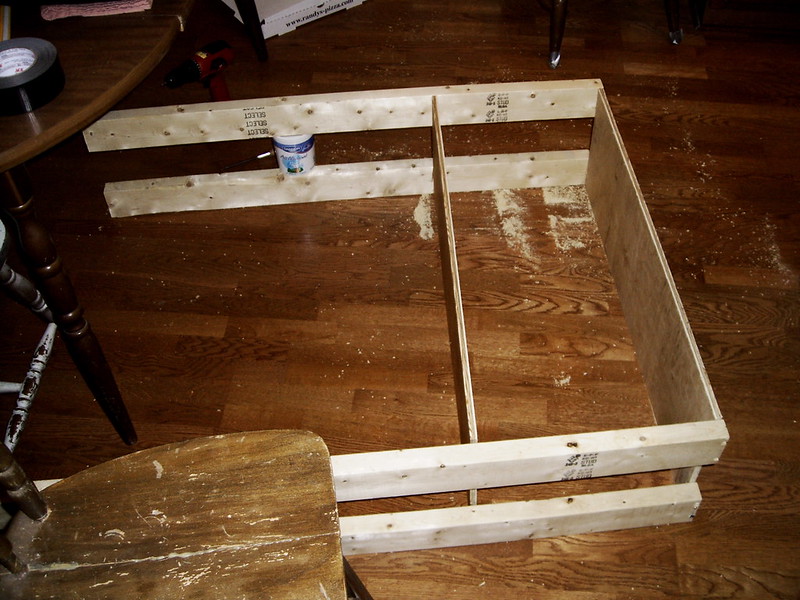 In this photo you can note several professional-grade techniques, including the use of a yogurt container to space the support legs. Also note how the vast amount of sawdust my approach generated had in no way deterred me from my intent to perform this construction in the dining room.

My methodology was awful, my design was embarrassing, and my refusal to acknowledge the failure of any of this process and rethink was…well…typical of me, I suppose, but still not great. Nonetheless, I completed the project.

I dubbed it: the failshelf. 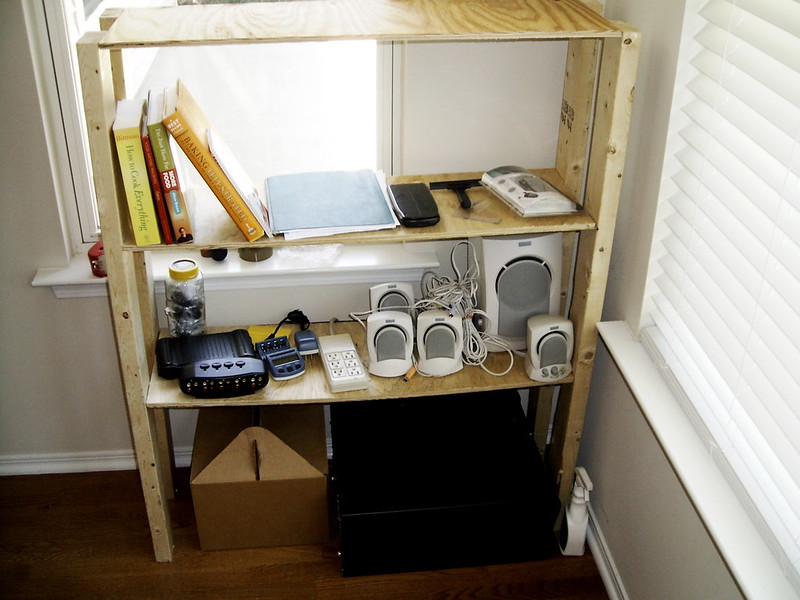 Despite its general terribleness, it served as an organizational aid.

And, four years later, it was still standing: 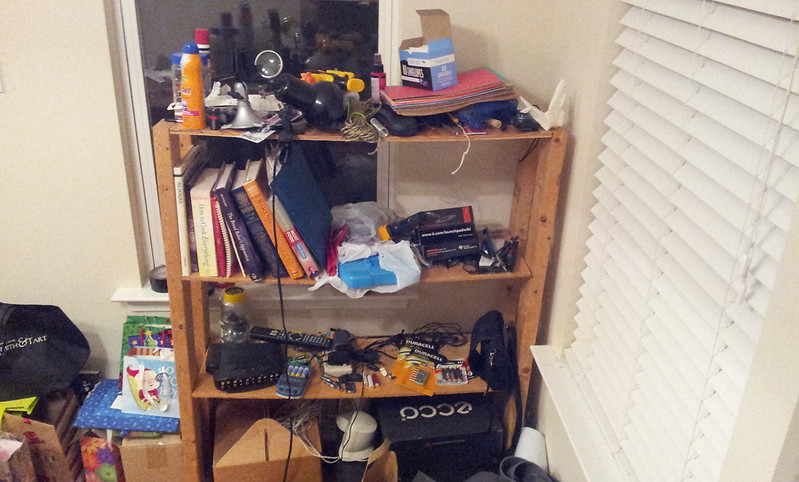 Although the second shelf had begun to bow a bit under the weight of my cookbooks (and the general level of organization had diminished significantly), the shelf showed no signs of impending failure. In fact, the shelf survived another five years after this picture was taken (for a total of nine years). When I got married and moved to my current house I didn’t really have a place for it (and my wife was not a fan of its general aesthetic), so I threw it away.

Although I dubbed it “the failshelf,” truly by any metric it succeeded at its goal. I learned a lot about woodworking and furniture building, and I got a shelf for just the price of wood and some entirely inadequate screws.

I’m very glad I chose to build the shelf, and I’m glad to have a chance to share it with you now.