Back in March when we first went into isolation, I needed to set up a home office. I already had a desk which held my own personal computer, so I thought it made sense to set up my work area somewhere nearby.

My wife had some floating shelves she bought from IKEA (if you’re not familiar with the terminology, floating shelves are shelves that mount directly to the wall, giving them the appearance of being floating. They are unfortunately not actually shelves capable of levitation), which combined with a printer stand made my “temporary” work-from-home desk: 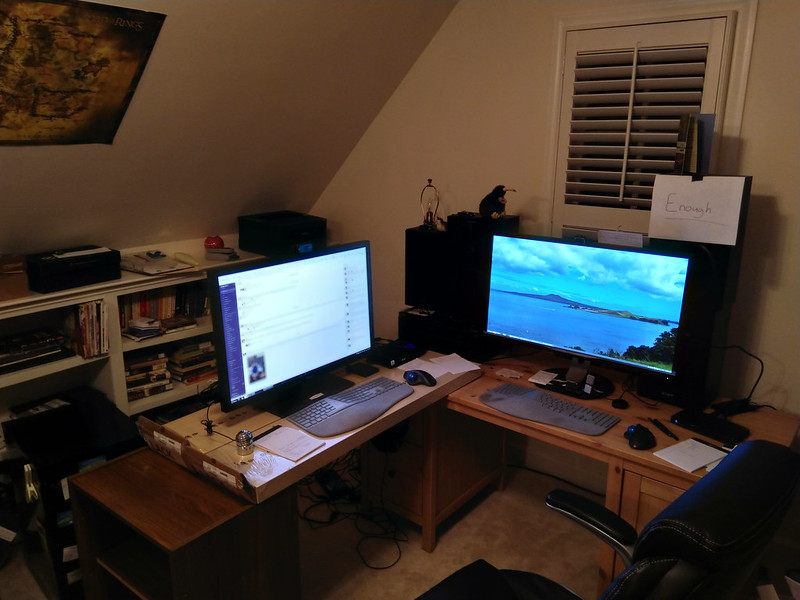 It worked well enough. It unfortunately made the left-hand drawers of my main desk somewhat inaccessible, as well as reducing the available desk space thereupon. But I saw this as a temporary situation, so I made due.

Seven months later, I was annoyed by my desk’s tendency to slide around a bit. And I realized…this situation was not quite as temporary as I had anticipated.

I first thought that perhaps I would buy a desk. But although I acknowledged the semi-permanence of this arrangement, I also hoped at some point to be back in the office, so I wasn’t sure I wanted the capital outlay of a desk which would only see (hopefully) a few months of use. I also had difficulty finding a desk which would meet my requirements.

My wife then suggested an alternative which seemed so obvious I wasn’t sure why it hadn’t been my first thought: why not build a desk? After all, I had basically built my current makeshift desk. If all I want to do is improve on the current situation, why not just build something slightly better that what I have now? I did, after all, have some prior furniture building experience, of a sort.

So I masked up and went to Home Depot, where I was able to buy some wood and get it cut to my specifications (I do actually now own a circular saw, so I could have cut the wood myself. But not only will they do it for me for free, which is nice, but having the wood cut meant that it would fit in my Civic much easier). I also bought some angle brackets for mounting the legs, since I was not keen on repeating my previous mistakes.

To make a long story short, I built myself a new desk: 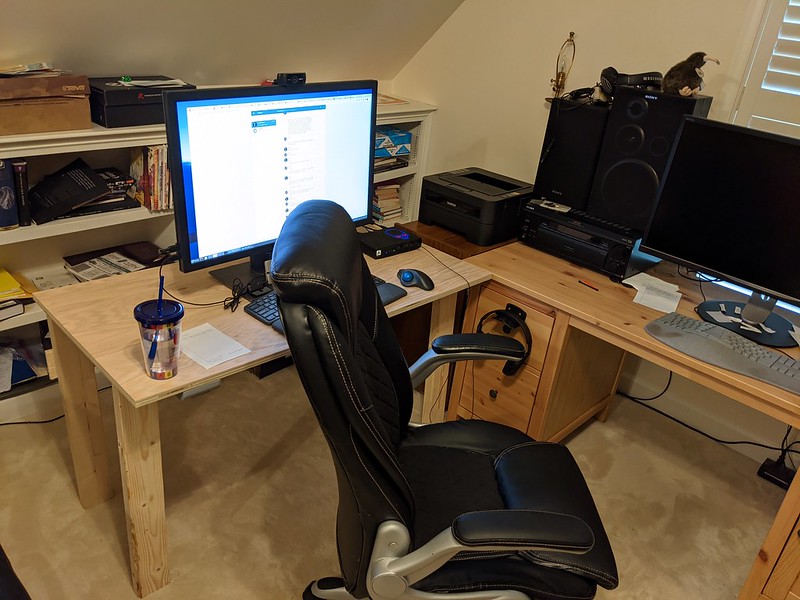 It’s not the most amazing piece of furniture building that’s ever been constructed, and although it’s plenty sturdy enough for my purposes it’s also not going to survive a heavy impact. But it didn’t cost me very much, and I think it perfectly straddles the line between “nice desk for working at” and “temporary desk for use during the pandemic.” Plus, now I have my printer back (and you better believe I used the instructions from that post in order to set it up again)!

Building the desk was a fun project, and I think it’s worth it to invest in your work space in order to make it more enjoyable to use and be at!

One thought on “The Pandemic Desk”