I am slowly but surely working my way through the story of how I proposed to my wife. Last time I told about talking to her parents. But I had two more tasks to complete: I needed to buy a ring, and I needed to find a place to propose. This is the story of buying the ring.

(Side note, it’s actually hard for me to write the word ring non-capitalized, since usually when I write it I’m talking about the One Ring of Sauron. This particular ring is thankfully of much less ill portent.)

My future wife’s best friend, who was one of my invaluable wingwomen throughout this whole operation, took my wife out to look at rings. I was thinking that this would be pretty much a dead giveaway that we were going to get engaged (it turns out that the conversation I had with her a bit later on that basically went “I want us to get engaged” was a bit more of a dead giveaway, but that hadn’t happened yet), but apparently looking at engagement rings is the sort of bonding experience that girls do even if there’s no potential partner in the picture at all.

In any case, the goal was for her friend to get a sense for what kind of ring she might want, so then her friend and I could go pick one out at a later date. What actually happened, though, is that she found The Ring (and yes, this time I’m going to capitalize it).

Apparently, she just fell in love with this one particular ring. I heard later that after she found it, even when the saleslady was showing her other rings she refused to take her chosen one off her hand. She loved this ring.

I honestly found myself a little annoyed at this. I had thought that choosing the ring would be something that we would both be involved in. It felt different to me somehow to be told that the ring was already decided on and I had no say in the matter. It didn’t help that this ring was very expensive.

Her friend must have gotten this impression from me and gently passed it on, because my girlfriend did tell me at one point “you don’t have to buy me this ring, but if you’re not going to then I’d like to know beforehand, because I don’t want to feel disappointed in the moment.” You know what, fair enough. But also, if she loved this ring so much that she would have to work through her disappointment to hear I had chosen a different one, I should probably just get her the one that she wants. After all, she’ll have this ring her whole life. What do I want her to think when she looks at her wedding ring? That I made the effort to get her what she wanted, or that I cheaped out?

I did have the opportunity to choose the stone, which gave me some measure of choice in the operation and also affected the price. So in the end, I bought the ring. It was a good decision, and I’m glad I did it. My wife rarely asks for anything expensive or luxurious, so it would have been a shame if the one time she did on something really important, I turned her down. 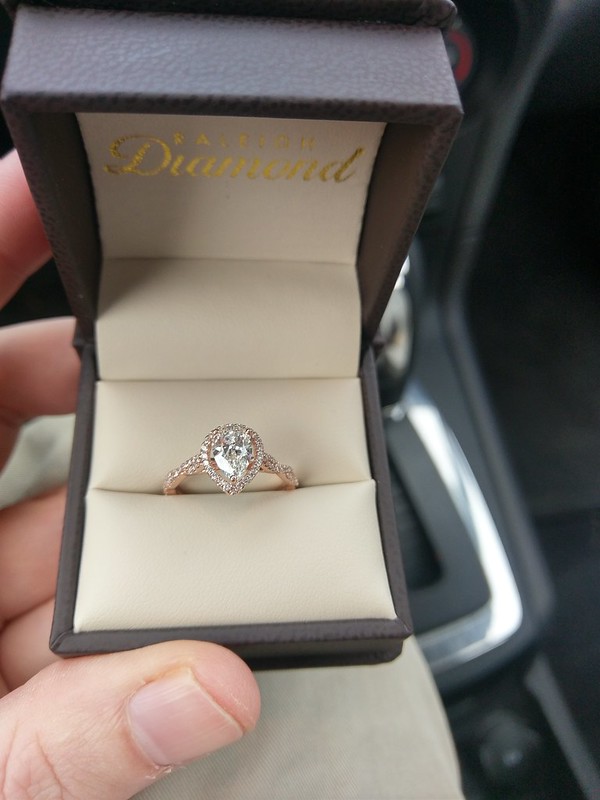 Having acquired the ring, I just needed to find a place to do the proposal. But that…will be a story for later.

One thought on “The Road to a Marriage, Part 3”