In my office I have a digital clock. I only own digital clocks, because I never quite got the hang of telling time on analog clocks. I can do it, but not at a glance. Anyway, this digital clock is one of those that has a radio inside and can set itself by receiving radio broadcasts. I received it from my parents some years ago…it was less of a gift and more of a “we’re not using this junk anymore” situation, so I feel a bit less bad about saying that this clock is barely functional enough to exist.

(I don’t know if other countries have this, but in the United States the National Institute of Standards and Time, or NIST, runs a radio broadcast that sends out a timekeeping signal that’s synced to their atomic clock. There are several consumer electronics products capable of receiving this signal and setting their time correctly accordingly. The broadcast comes from a station in Colorado, so here on the East Coast it’s a bit less reliable.)

The clock is not capable of figuring out whether or not Daylight Saving Time is in effect (which is probably for the best, as the rules have changed since the clock’s manufacture so it would probably just get it wrong) or the time zone (which would require it to know where it is, a difficult feat for a cheap and non-network-connected piece of electronics). Its interface is a bit Byzantine, and as previously mentioned it’s a little difficult to get it to actually sync with the radio signal.

But by far its biggest failing is that it absolutely devours batteries.

This failing is no doubt related to the fact that it can’t get a very good fix on the radio signal, causing it to expend more than the usual amount of energy as it tries to set itself. It’s also possible that by using 1.2 volt rechargeable batteries instead of 1.5 volt alkaline batteries I was making the situation worse myself, but there’s no way I was going to use disposables when I had to change the batteries every three months or so.

Therefore, despite my fairly mediocre success at converting battery-powered appliances into corded, I figured I’d try to turn the clock into a plug-in clock.

Rather than the fairly cavalier approach I took with the dust buster, I addressed this project somewhat properly. I knew that the clock took two 1.5 volt batteries wired in sequence, so it was expecting somewhere in the area of 3 volts. Most of my spare AC/DC converters delivered more like 9 or 12 volts, so I figured USB (with its 5-volt standard power delivery) would be closer to ideal. I figured I’d need to reduce the voltage somehow, but I thought it might be possible to (no pun intended) overclock the clock by providing it with five volts, perhaps if I was very lucky even improving its ability to receive radio signals.

Long story short, this did not work, and providing the full five volts to the clock just turned on every segment of the LCD. Whoops. At least I didn’t release any of the magic smoke.

I found some very cheap 3.3v voltage regulators, and I figured 3.3 volts might be close enough to work. They arrived in a couple of days, and I tested them out with alligator clips and a voltmeter. Success!

So I got to soldering! 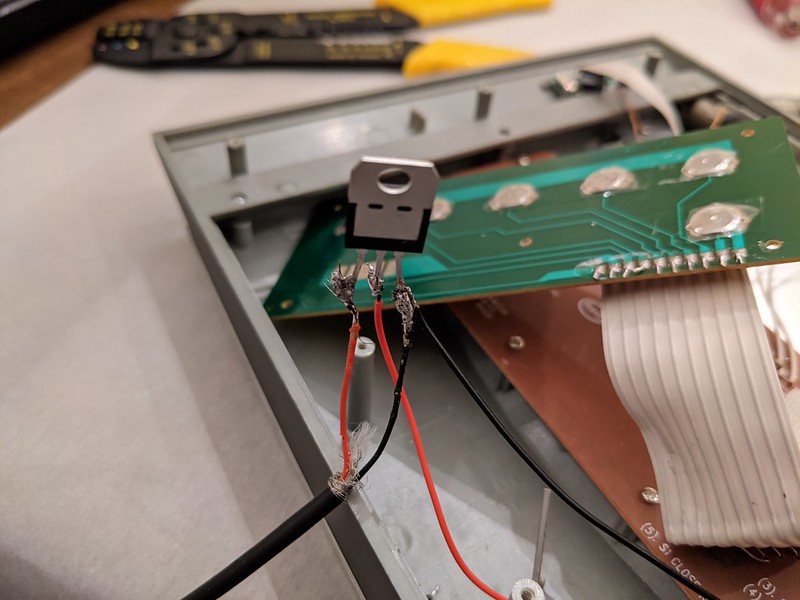 I am in fact doing this on the dining room table, but at least I put down some parchment paper. And yes, that’s not the best soldering job I’ve ever done. This was definitely a quick and dirty bodge job.

Because I am not very intelligent, I didn’t consider how I was going to run the wire into the clock housing until after I’d already soldered it together. The only drill bit I have big enough to drill a hole that a USB type A connector can pass through is my big step drill…but at least it makes a nice neat hole: 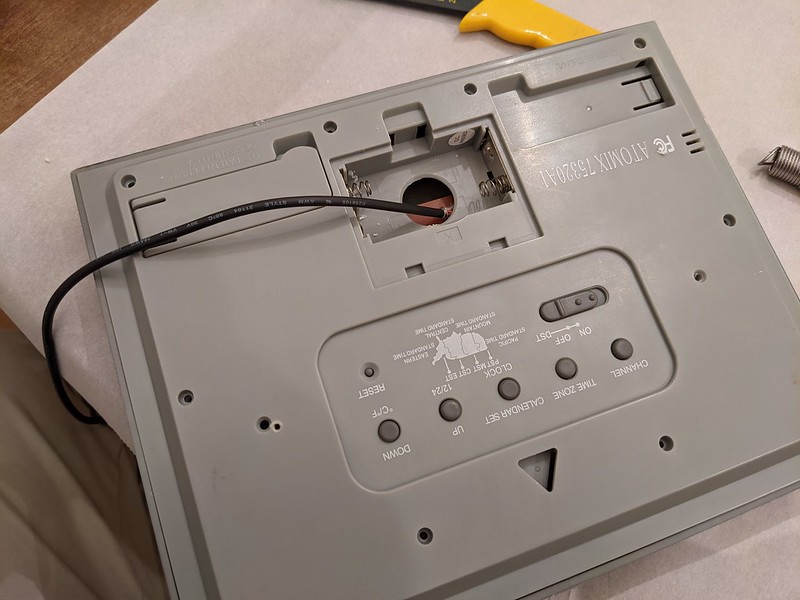 The USB cable I sacrificed for this project was a janky old micro-USB cable that seems to always work its way free out of whatever charging port I stick it in, so cutting its head off was not a difficult decision. Had I used more foresight, I would have realized that a longer cable would be better, since converting the clock to wired dramatically reduced the freedom of placement I had previously enjoyed with it.

In any case, the clock works now. It doesn’t seem to do a much better job of setting itself, and the relatively short cable does dramatically limit placement options. So once again, a modest victory at best. But a victory nonetheless! (Plus, it staved off boredom for a couple of evenings).

2 thoughts on “The Clock”