There are probably many pets who have had to adjust to the new normal just as humans have. Hopefully most of them are enjoying additional time with their humans, though undoubtedly there are a few pets who find their humans’ constant presence a source of confusion. Thankfully, our cats seem to have taken it mostly in stride. Perhaps more so than their humans. It will be interesting to see if they experience separation anxiety once I can finally return to working from the office again.

I try to take the opportunity several times a year to go on a hike or some sort of nature trip and take some nice photos. Unfortunately, during this time I’m not really able to do that. One day I decided I wanted to do some photography anyway, and I chose the subjects most readily at hand: our cats. 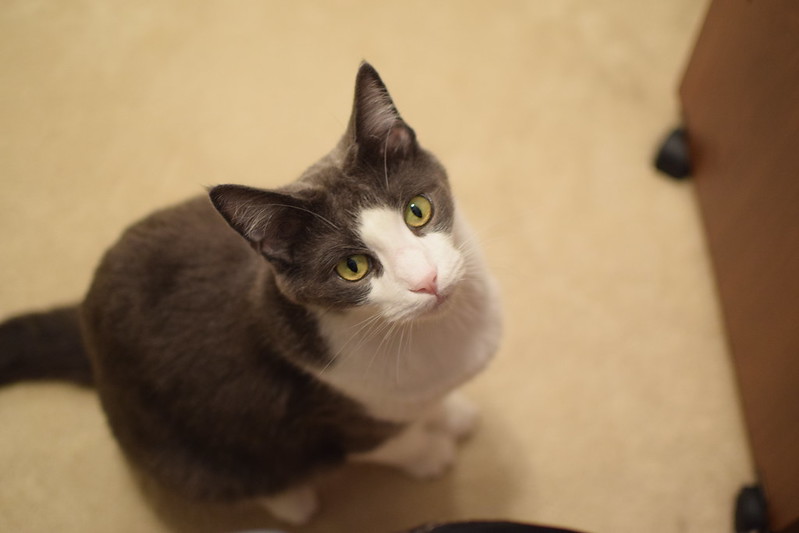 I feed the cats every day at 8am and 6pm, with a small snack at 10pm. I was wondering if sticking to a rigorous schedule every day would cause them to only feel hungry around feeding time and not be so food-oriented the rest of the time. But I guess their body clocks are not very well-honed, because nearly every day between 3 – 4pm, I’m greeted by this sight: Gillie next to my office chair, staring up at me. It looks cute, and it is cute. It’s also him reminding me that it’s food time (even though it isn’t). 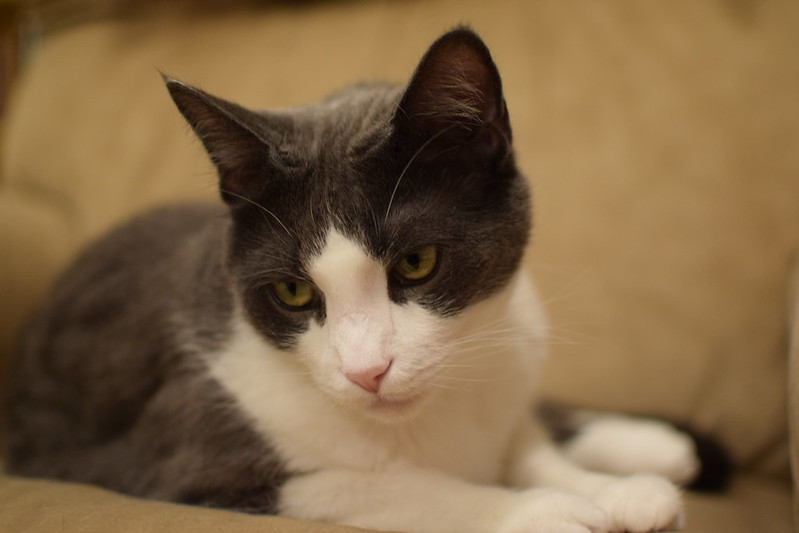 This shot reminds me of the movie Zoolander. Gillie looks like he’s doing a solid Blue Steel off to the side. 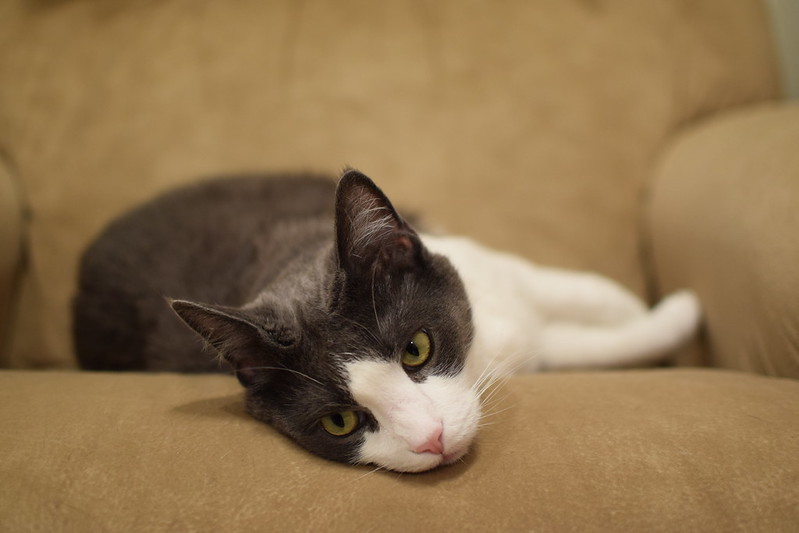 When he’s not posing for glamour shots, he spends most of his time lying around. He can run when he wants to, and he’s actually quite fast, but he rarely wants to.

I really like this shot. I think it shows a lot of his character. 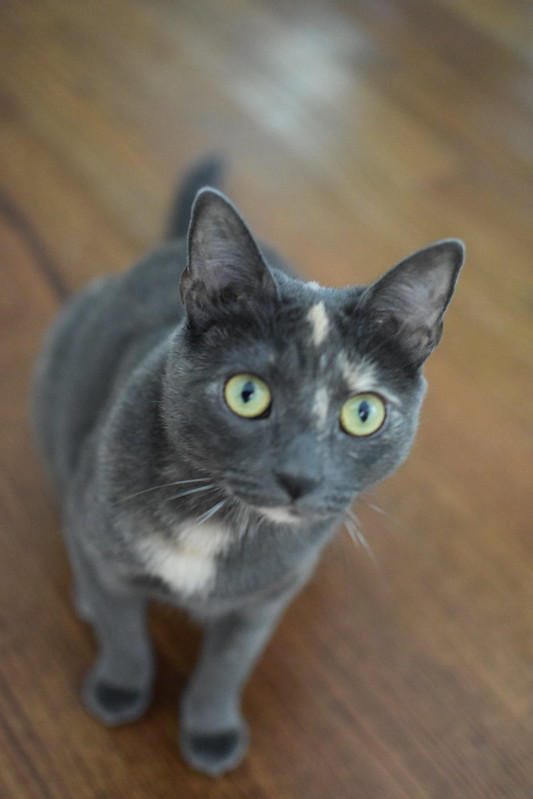 Kiwi can be hard to photograph, because unlike Gillie she is an object in motion. I made the mistake of using autofocus on this shot, which is not always capable of keeping up with our little kitten. 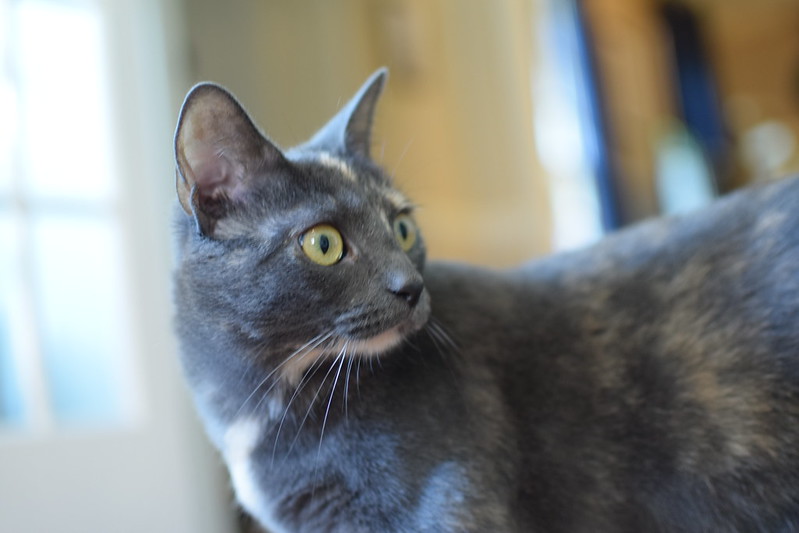 This shot is very typical of Kiwi. Even when she’s relatively calm, she will occasionally receive a transmission from somewhere and teleport off into the cat dimension. She often seems vaguely startled and stares very intensely at whatever she’s looking at. 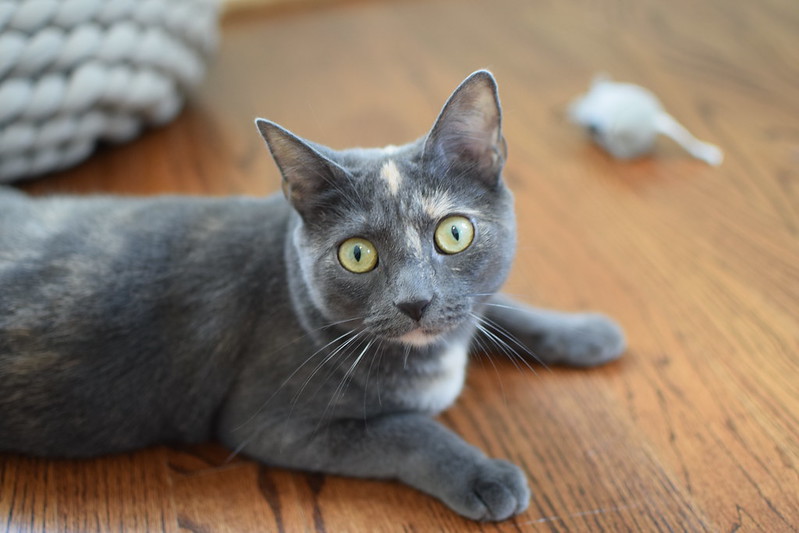 This is my favorite shot I’ve taken in a long time. Her little personality comes through so clearly in this photo. This girl is Ready. To. Play! You can even see one of her mouse toys in the background (she’s always putting these toys right in the walking path. Stepping on one isn’t painful, thankfully, but it’s a little disturbing. When one is barefoot one never wants to step on something unexpected and squishy. 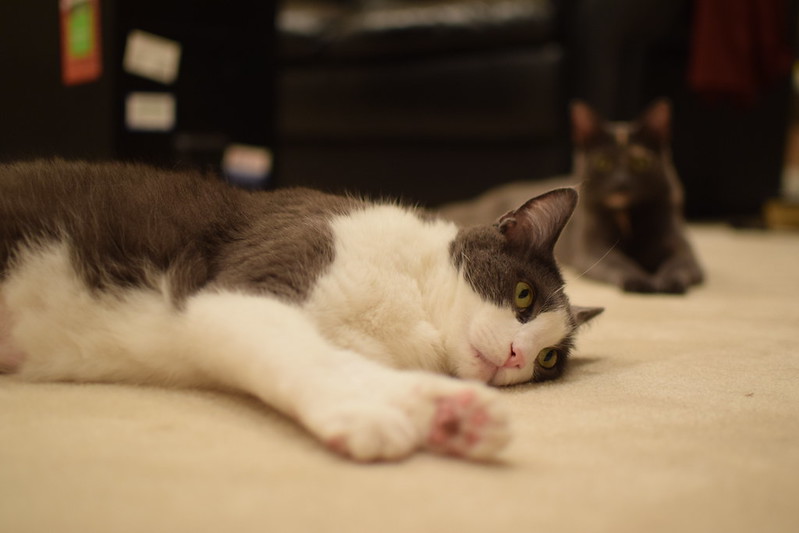 Thank you for letting me share my cat photos with you! I had a lot of fun playing photographer, and I like some of these shots quite a lot!

One thought on “The Cat Photoshoot”